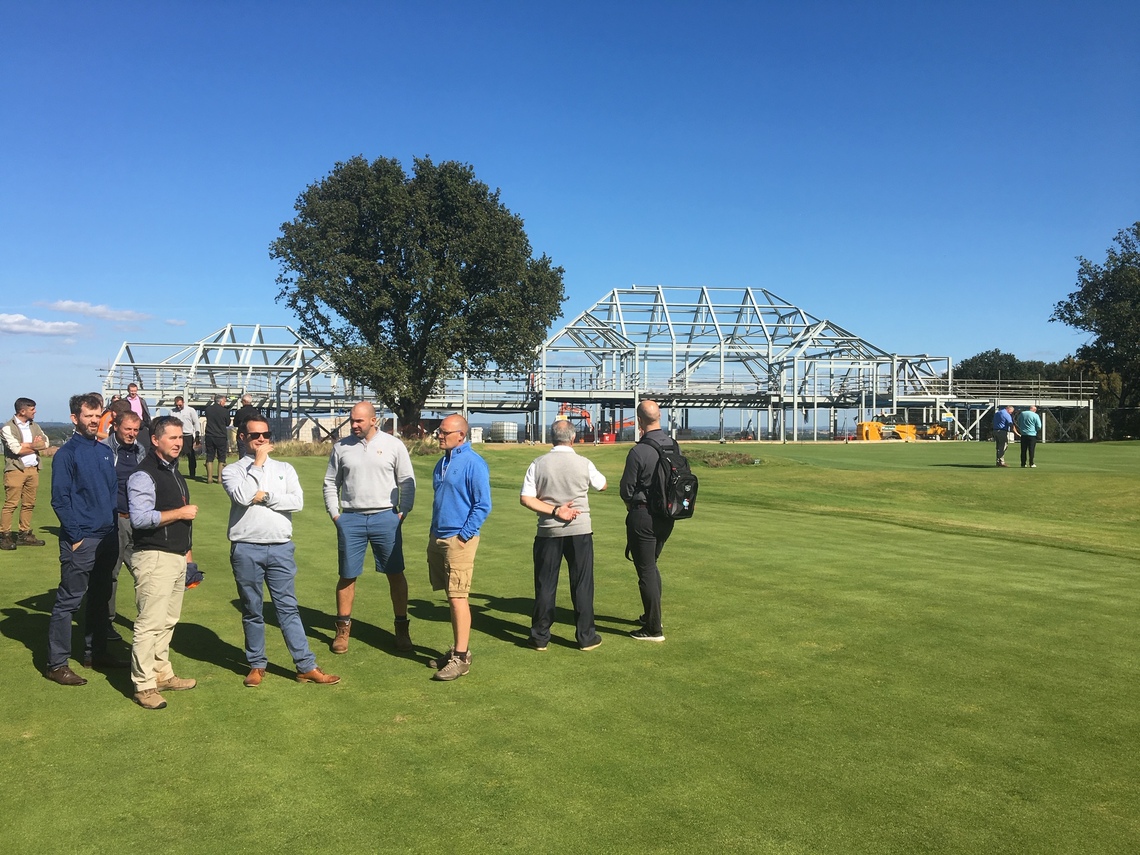 The club’s Harry Colt remodelled heathland course sits directly in the path of the government’s proposed HS2 (High Speed 2) high speed rail line which will cut across eight acres of the course with the loss of five holes, the clubhouse and greenkeeper’s compound.

Intent on finding a solution that enabled them to continue to operate, its officials worked proactively with HS2 and local authorities to secure its future and create a new vision for both the club and its course. It acquired 25 hectares of adjacent farmland and appointed Gaunt Golf Design to develop a masterplan for a reimagined 18-hole golf course. Plans were approved in 2016 and last year they broke ground on a major redevelopment which has seen five new holes constructed and others on the existing site rerouted to create a completely new look course. Ten hectares of heather and acid grassland is also being created, along with a new practice area, short game practice zone and putting green, all while keeping 18 holes in play throughout the project. Rain Bird has been selected to supply the irrigation system which features 250,000 metres of dripline to aid the heathland restoration. 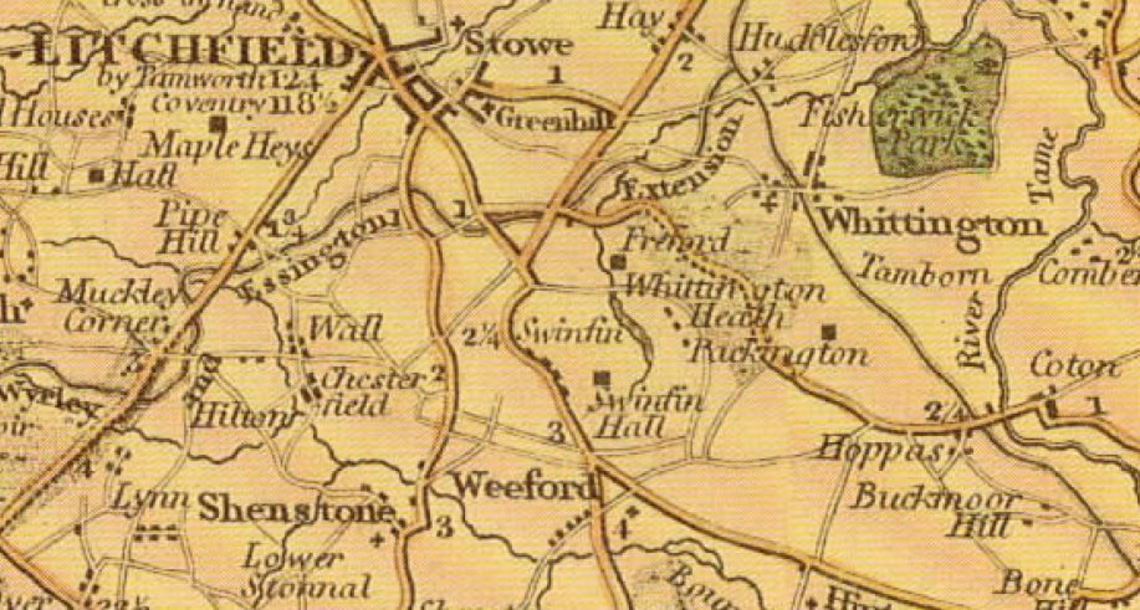 Bringing history and tradition into the 21st century

Jonathan Gaunt explained his and the club’s vision for Whittington Heath Golf Club, and why this challenging project is both an architectural and ecological opportunity.

“The new ground was previously intensively managed arable farmland, growing oil-seed rape and potatoes which had seen many years of manuring and fertilising. In historic maps this farmland was essentially lowland heath, with sandy subsoil beneath the topsoil. In conjunction with HS2, Whittington Heath has agreed to return a significant proportion of this farmland to a heathland state as part of the rail project’s commitment to mitigate losses elsewhere. 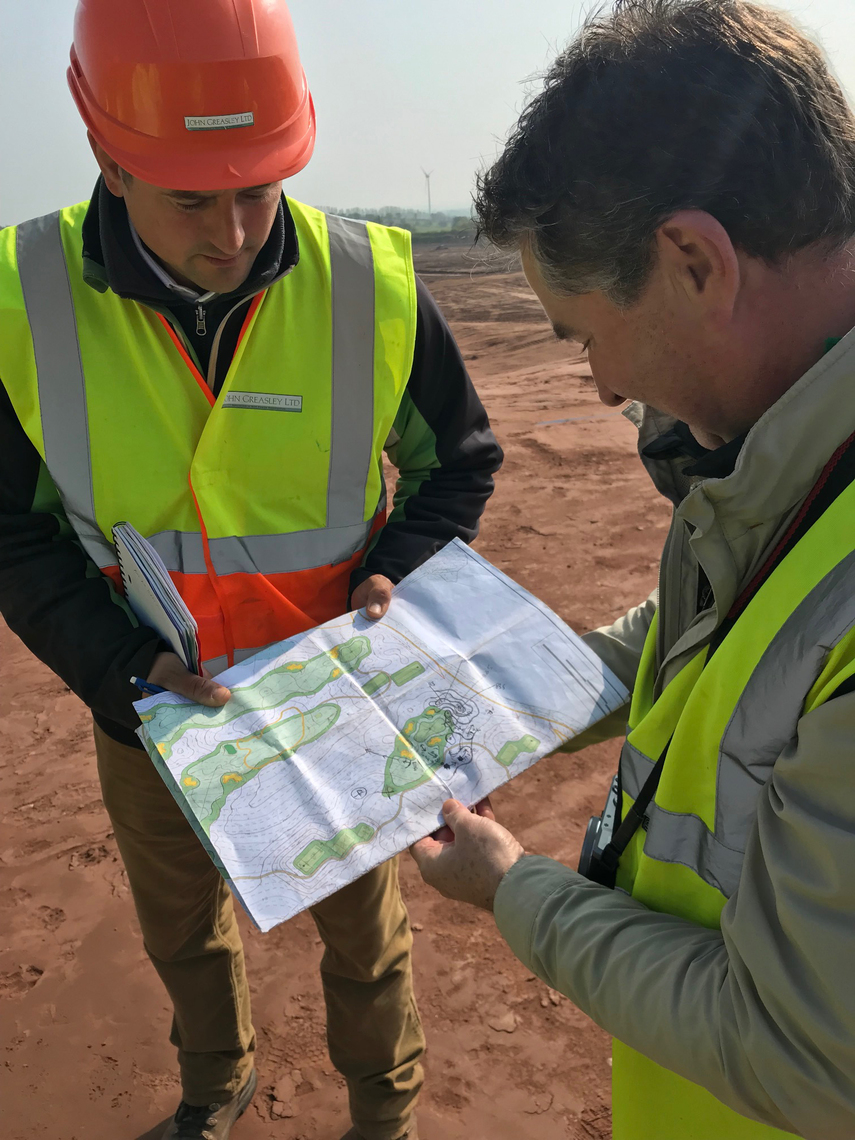 The ecological element has been an important factor in the golf course plans, and these have been developed working closely with specialist ecologists, Johns Associates, who are assisting and advising on all environmental aspects of the project through to completion.

The challenges of the site have been presented to the contractor, Greasley’s, in the form of difficult ground conditions – there is sandstone shale just 1.5 metres below the surface. In some areas they have had to excavated to up to 4 metres deep to create hollows, swales and soakaways to aid the drainage system, which has involved some very heavy-duty excavation machinery. Equally, the nutrient-rich topsoil has a high pH and is unsuitable for growing heather and acid grassland so it has had to be completely stripped from the mitigation areas and used imaginatively for fairway construction and peripheral featuring. Before heather and acid grassland seed can be sown, the sandy subsoil has to be acidified with the application of both sulphur granules and Aquaphix liquid.

While the new golf holes are designed and will be constructed to replicate the characteristics of the original Harry Colt remodelled course, the landscape that the course is set in will establish as a traditional heathland environment, comprising heather and acid grassland, four eco-ponds, additional native species hedgerow and woodland, along with public access. The status of the ecological land is preserved by a binding agreement and the golf club is responsible for maintaining it as such on behalf of HS2. 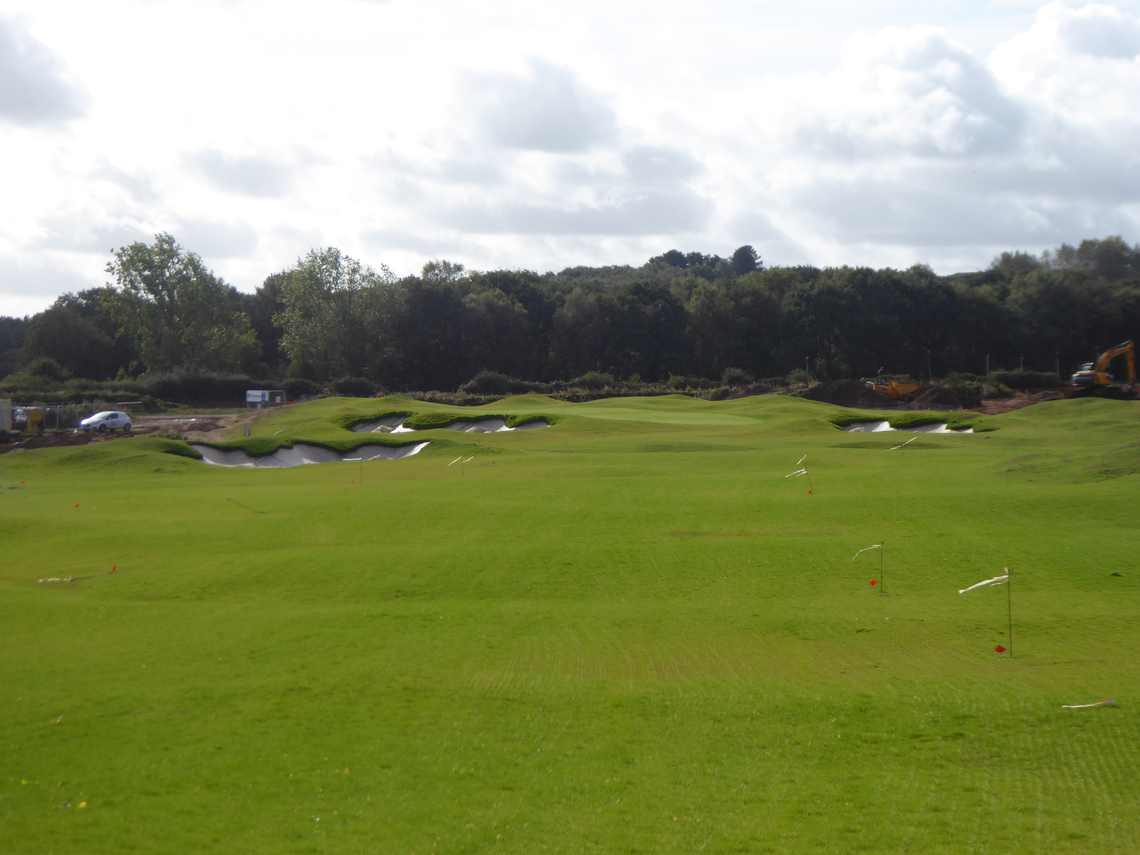 The finished result will be an integration of new holes with the old, of bringing the history and traditions of Whittington Heath into the 21st century, whilst being appreciative and sympathetic to a course that has been played and enjoyed by hundreds of thousands of golfers since 1886. Our aim is not only to keep this tradition alive, but to revitalise the course so that it can continue to be a challenge that is fun to play for all golfers for another 130 years. In fact, we aim to integrate the new with the old so that, in only a few years from now, you won’t be able to ‘see the join’.”

Rain Bird’s Regional Golf Sales Manager for the UK, Jimmy Sandison, said: “This quantity of drip irrigation on a golf project is unprecedented in Europe.

Rain Bird’s premium XF range is being installed sub-surface and controlled by a series of Rain Bird solenoid valves and filters connecting to a Nimbus™ II Central Control System. Drip is still regarded as the most water efficient method of irrigating. The volume from each emitter is considered low, and while extended watering times may be required during the establishment of heather, the system can operate during the day without causing disruption.The pressure-compensating emmiters are equally spaced at 40cm, each delivering 1.6lph of pin-point irrigation along the vast expanse of heather.

The rest of the course will benefit from the efficiences of Rain Bird 950 Series rotors and 751E rotors around the greens.”

Whittington Heath recently appointed Mark Fry as its new Course Manager. He joined from Worplesdon Golf Club, relocating from Surrey to Staffordshire with his family to take up his new role.

The golf course remains fully open with 18-holes playable throughout the redevelopment. Construction of the new holes is expected to be completed by December 2019, with a view to bringing the new 18-hole course layout into play in spring 2022.

Subscribe to the Rain Bird 360 newsletter to keep up to date with the latest golf product updates, events and activities.