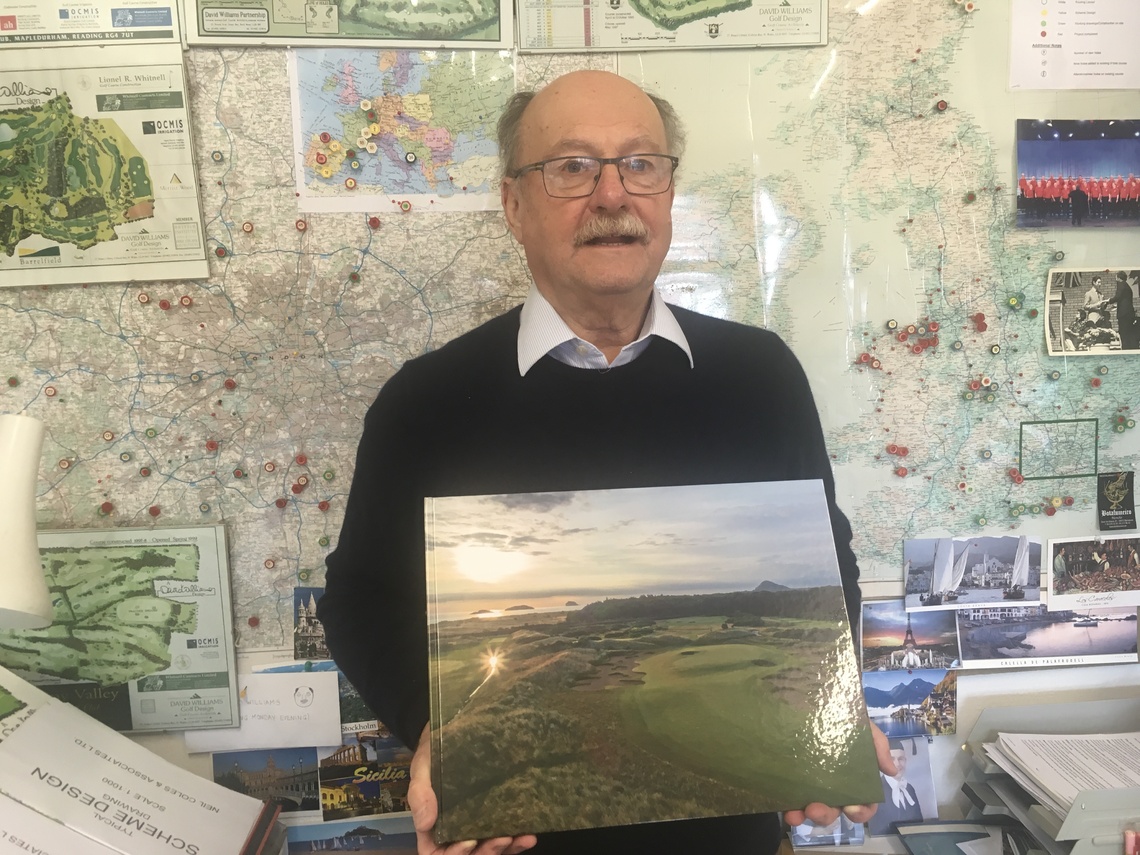 This coincidence led to a remarkable gift, celebrating both occasions, arranged and given by David’s son, Thomas, a journalist and his daughter, Ffion, a PR Manager. As David explains, “Without my knowledge, they took the details from the DWGD website of the over 30 new courses which we had designed or co-designed throughout the UK and Europe in those 30 years, and between them contacted each club for up-to-date professionally taken photos of each course to include in a printed book. They designed and arranged the photos into a large A3 size glossy hardback book featuring every course. A wonderful surprise – and a magnificent momento, not only of my own 70th birthday, but also of the 30 years of David Williams Golf Design”.

David continues “After five years in the late 1980s as Golf Course Architect to the European Tour in their design arm “Tour Developments”, I had decided to take the plunge and form my own practice in the first year of the 1990s. And I couldn’t have chosen a better time to launch a new golf design business!

The publication in the late 1980s of the R&A’s “The Way Forward”, which demanded the building of over eight hundred new courses in the UK to meet growing interest in the game, helped by the growing prowess of Europe’s top golfers – Ballesteros, Langer, Lyle, Faldo and Woosnam – who not only won individual Major titles themselves but helped Europe to become a major force in the Ryder Cup, together with government pressure to “set aside” unwanted agricultural land, all combined together to increase the interest in golf – and produce a need for hundreds more new courses to be built in the 1990s.

As a result, almost a thousand new courses were built in the UK in the next fifteen years, and we at DWGD were superbly positioned to take advantage of the situation, often building two or three new 18 hole courses a year.

As well as the major Championship venues created, I have particular great pleasure in the relationships we built up and developed, including clients for whom we built multiple courses. These include Barrelfield Golf Network (now 360 Golf) for whom we built seven 18 hole courses around London and the south east , including Caversham Heath (Reading), Merrist Wood (Guildford) and Kingshill (Maidstone). I had a very enjoyable times building three courses for the late Ron Noades, who was Chairman of Crystal Palace Football Club at the same time as we created three courses at Surrey National (Caterham), Westerham (Kent) and Godstone (Surrey) with him. 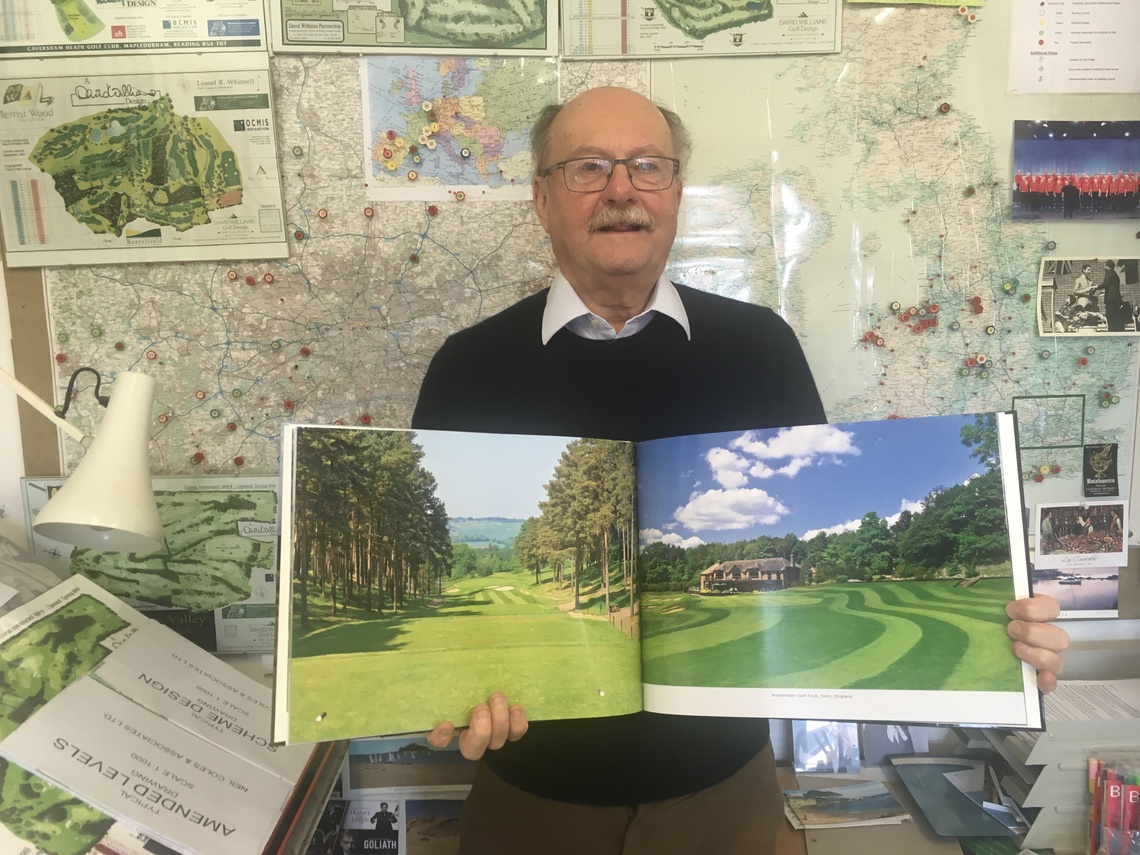 David, with the page on Westerham Golf Club, one of 20 new courses designed in his own name

As a qualified Chartered (building) architect, my introduction to golf architecture was in the early 1980s when meeting Brian Huggett and Neil Coles at my home club of Conwy Golf Club, who, as Huggett Coles & Associates, had been appointed golf architects for a re-design project at the club caused by the building of the A55 North Wales Expressway, which took two holes of the original course. After I came up with essentially the same design solution to the loss of the two holes, I was appointed as their consultant golf architect!

Although Brian and Neil split their partnership only a few years later, I have continued to work to the present day as Neil’s consultant architect in his business of Neil Coles & Associates, and in this time we have built together ten excellent courses, including two at PGA Catalunya in Spain (also with Angel Gallardo), at Chateau de Preische in France, and including Chartham Park, Castle Royle and the Karsten Course at Gainsborough GC in this country.”

David continues “At that time, with golf design work all over the UK and Europe, we employed not only golf architects, but also chartered architects, landscape architects, IT professionals and engineers, enabling us not only to design the actual courses, but also their clubhouses and importantly create the overall masterplan on which the complete development was based.

We are very proud to have created the overall Resort Masterplans for three of Europe’s most renowned 36 hole venues, at PGA Catalunya near Girona in Spain (with Neil Coles and Angel Gallardo), at Archerfield near Edinburgh in Scotland (with David J Russell) and at Carton House near Dublin in Ireland (with Peter Townsend). 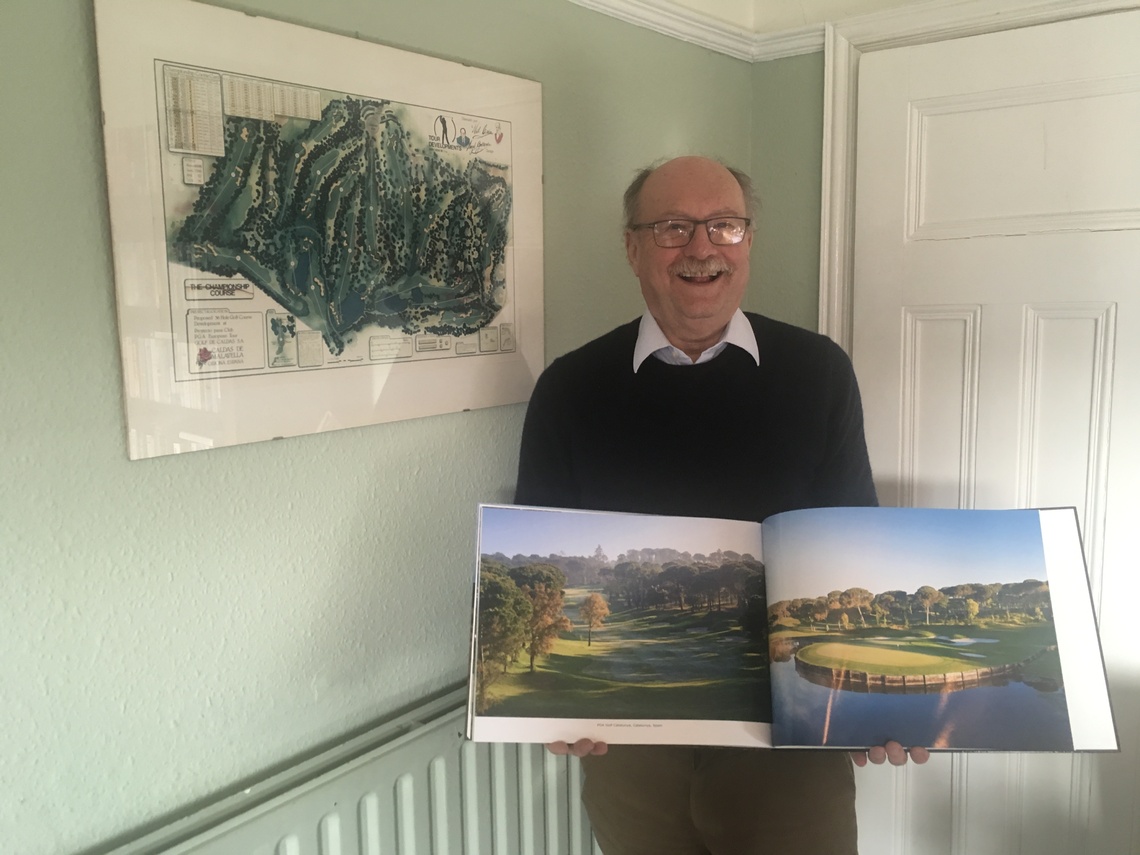 David, with the page on PGA Catalunya (with Masterplan on wall behind), one of 14 courses co-designed by him, mainly alongside leading professionals

During this period, we employed many very talented golf architects, landscape architects and leading IT professionals, all of whom had their first experience of golf design in our DWGD offices but who have gone on to have great careers in the industry, including Andrew Haggar (now Head of Design at Faldo Golf) and Matt Sturt (now Head of IT at European Golf Design)”.

However, as well as the successes, there were also disappointments, as David explains “ Like all long established golf architects, we look back on those projects ‘which got away’, those schemes on magnificent sites, which we were certain would progress to fruition and which we had developed up through Scheme and Detailed Design, and in many cases, gained the necessary planning permissions and permits. If we had built them all, we would probably have doubled our number of completed courses!”

These included a number of projects for Barrelfield Golf Network throughout the south east, including one at Frankham Manor in Kent, and three projects with David J Russell, one in Derbyshire, one on The Great Orme’s Head in North Wales (and only a few miles from the DWGD office!) and another on the island of Lastovo, just off the coast of Croatia.

Many projects fell foul of the 2008 financial crash, including two in Spain, co-designed with Angel Gallardo, one at Guadix near Granada, and the other at Excaray in the La Rioja region. Angel Gallardo was also involved in another aborted DWGD project, with Peter Townsend, for a 36 hole project near Pollenca on the island of Majorca.

DWGD’s long involvement with Neil Coles has also resulted in a number of projects which fell at the final hurdle! In fact during the 1990s, David and Neil tried to analyse why only a few of their dozens of active projects made it to the construction phase. The post-analysis conclusion - “the 17th hole had to be a par 3”. On those where the routing had that characteristic, the courses were invariably built and where it didn’t, they weren’t! Not a fully scientific reason of course, but one which ensured that most of their designs from that time onwards had the 17th hole as a par 3! 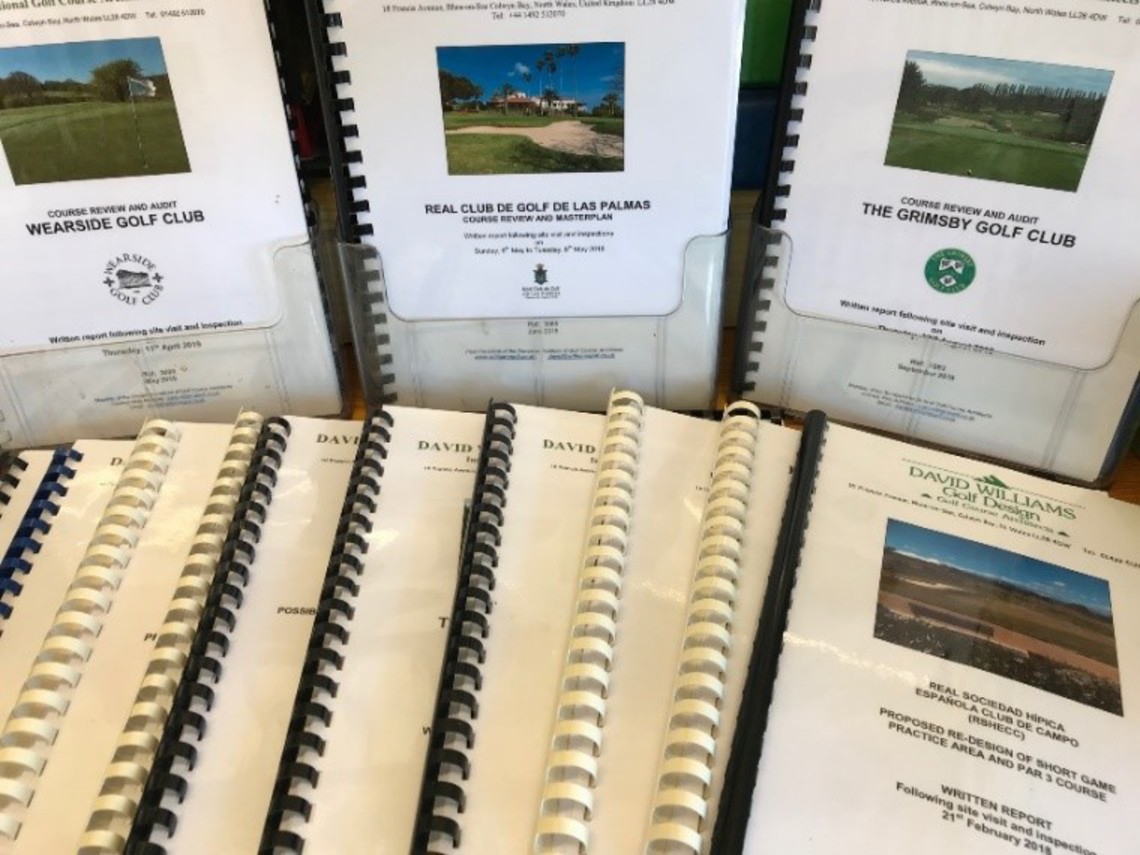 As well as the new courses constructed, DWGD have been involved for the whole of its 30 year history in providing advice and consultancy to over 200 golf clubs throughout the UK, as far apart as Lundin Links in Scotland down to Basingstoke GC in southern England, and from Milford Haven GC on the south western extremity of Wales to Faversham GC (Kent) in the extreme south-eastern corner of England. This work has involved not only Course Reviews and Audits, but also the preparation of complete Masterplans for possible long term development. Many new holes, greens and tees have been re-designed and re-built through the country, including two clubs which were expanded from 9 hole layouts to full 18 hole courses at New Mills GC in Derbyshire and Palleg GC in South Wales.

As well as in this country, this service has extended through Europe and further afield, including two projects in North Africa, where, on behalf of the R&A, David Williams visited both Libya and Algeria to advise the respective Golf Federations on golf development throughout their whole countries.

A similar country-wide study was also carried out for the Welsh Assembly Government, who commissioned DWGD to investigate potential sites for completely new golf courses throughout the length and breadth of Wales, sub-dividing the study into new links, parkland and potential short courses. DWGD also were commissioned to assist the Inland Revenue of Ireland in two cases where leading championship courses were aiming to claim depreciation of the whole of their golf courses, and not just the machinery.

Like most golf architects worldwide, DWGD have concentrated greatly on renovation and restoration projects for the last ten or so years, with the general huge reduction in new courses being created throughout the world, and many clubs have been assisted in that time. 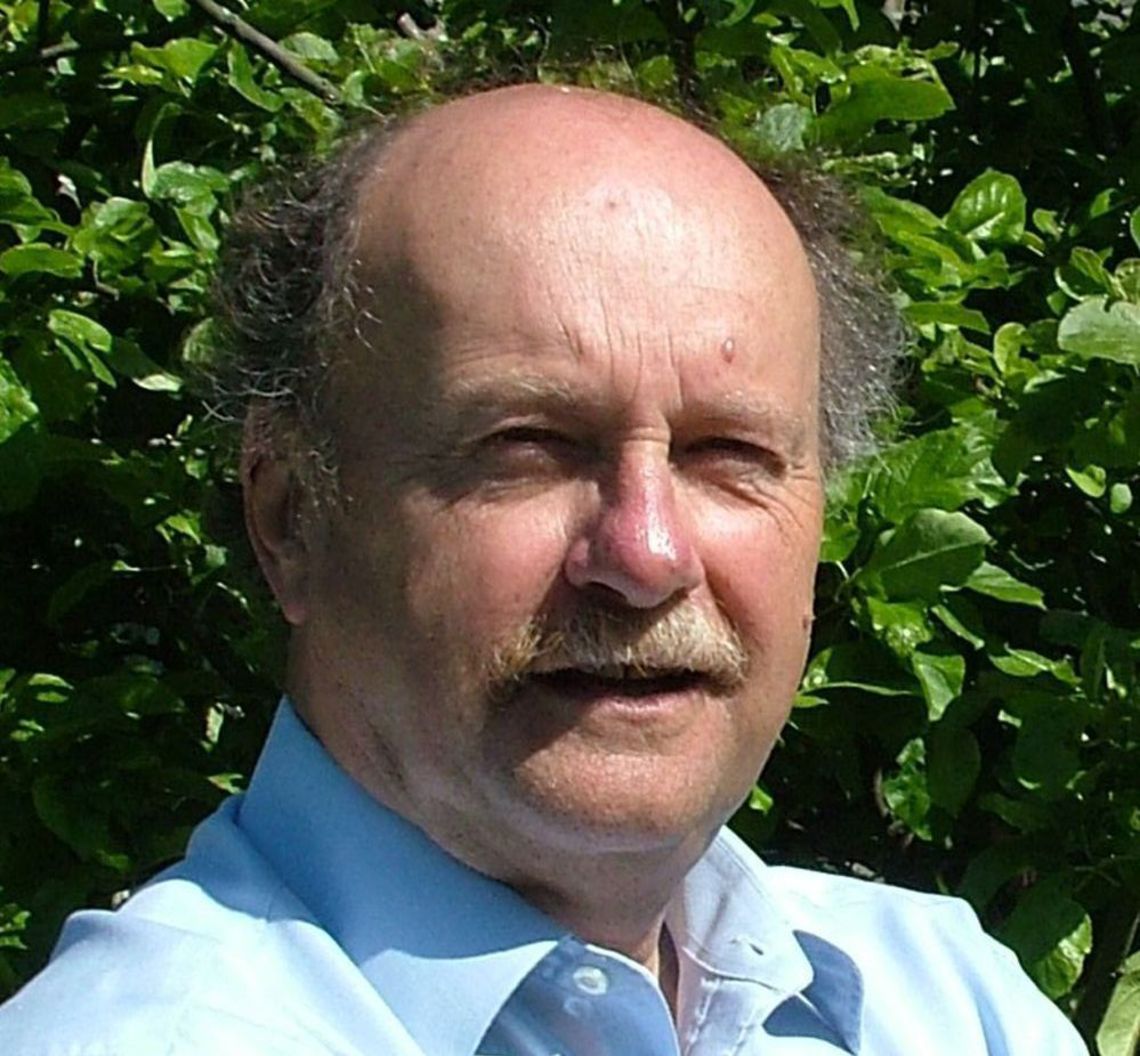 Much of the practice’s focus in these last few years has been on projects in Spain, where half a dozen clubs have commissioned the practice to undertake comprehensive course reviews, and produce and implement long-term Masterplans. These include three of Spain’s “Royal” courses, at Real Golf de Pedreña (Santander), Real Sociedad Hipica Española Club de Campo (Madrid) and Real Club de Golf de Las Palmas on the island of Gran Canaria.

Also in Spain, in the past few years, DWGD have designed two very high quality private courses for individual clients on their private estates, both providing a full unique 18 hole experience to quality USGA spec greens – but without the necessity to build – or ultimately maintain – 18 separate holes.

A final word from DWGD founder David Williams: “From the design of 36 hole Championship venues down to 9 hole pay-and-play layouts, from country-wide searches for sites for new courses to suggesting the precise site for a course on a site of thousands of acres, from advice to national Golf Federations on all their existing golf courses to building a tee for a small 9 hole venue, the last 30 years have been varied, challenging but great fun…………...and so onto the next 30 years!”