History of the European Institute of Golf Course Architects

On the 3rd July 2000, at the Crown Plaza Hotel in London, the three leading golf course architects’ organisations in Europe merged to form the European Institute of Golf Course Architects.

becomes a gathering place for our shared experience, information, training and promotion for the common goal, and that our knowledge in the fields of design, construction, landscaping and the environment, becomes the basis to enhance the quality of European golf architecture.
Alain Prat

Nearly 30 years’ previously, on the 14th July 1971, in London at the Great Western Hotel, Paddington, eight golf course architects met together to establish an association of professional golf course architects. Four founding fathers, C. K Cotton (1887-1974), J Hamilton Stutt (1924-2008), Donald L Harradine (1911-1996) and Fred W Hawtree (1916-2000), all highly individual, independent minded, active architects, all of whom had a rare combination of skills, partly self-taught, partly learnt from contact with a number of the great architectural figures of the earlier part of the century, succeeded in developing a common sense of purpose and corporate framework for converting individual flair into professional qualifications. That original purpose – really the establishing and signalling of the importance and respectability of the subject and work – remains undiluted in everything the European Institute does today.

The British Association of Golf Course Architects, as it was then known, flourished throughout the 70s and 80s although, with very strict entrance criteria demanding experience and expertise in the field of golf course design, numbers grew only slowly in initial years. In the early 1990s, the British Association changed its name to the British Institute, a change not only in title but also in emphasis, moving from a loose association of like-minded and similarly qualified individuals to a more formal Institute, conscious of its role in supporting all members and, equally importantly, providing education for prospective golf architects.

Hamilton Stutt, Eddie Hackett and Geoffrey Cornish receiving their medals in 1996 with Peter Harradine and Martin Hawtree accepting them on behalf of their fathers, Donald and Fred

During the Silver Jubilee year of 1996, the Institute established its permanent headquarters at Merrist Wood House in Worplesdon, Surrey, England and also set up a Continuing Professional Development programme to educate its members on various aspects of our profession. It began a series of regular conferences, attracting wide-ranging audiences from outside the profession on related topics to golf course design. At the Institute’s Silver Jubilee Dinner held at Wentworth in October 1996, the Institute awarded silver medals to four Fellows for their outstanding contribution to golf course architecture - Don Harradine, Fred Hawtree, Eddie Hackett and Hamilton Stutt. A further medal was awarded to Geoffrey Cornish, an Honorary Member of the Institute.

The following January, the Institute welcomed the first intake to its Diploma in Golf Course Architecture, held at Merrist Wood in association with the College, and being a one-year distance learning Diploma with 8 weeks residential study at Merrist Wood. 8 students enrolled on that first year and similar numbers have continued to benefit from the assistance of Members in the running and tuition of the course. 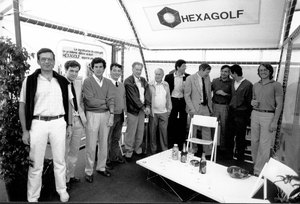 The French Association of Golf Course Architects was founded by Robert Berthet in 1983, initially comprising 20 members, to reinforce the image of professionalism and a high quality of design. With a huge expansion of golf within France itself, with over 300 courses built during the 1980s and 1990s, mostly designed by Association members, AFAG were instrumental in the expansion of the game throughout France. However, its members were also able to export their knowledge and to contribute to the global development of the game, with many countries in the world carrying the signature of its members.

The European Society of Golf Course Architects was founded by Gerold Hauser (Austria), who became the first President of ESGA from 1989 to 1994. With an office in Vienna, Austria, the Society’s influence with members from numerous countries spread throughout Europe, with the concentration of members in Germany and Austria. Gerold Hauser was succeeded as President by Ramon Espinosa (Spain) and by Peter Harradine (Switzerland), son of one of the founders of the British Institute, Donald Harradine.

By the early 1990s, all three organisations were actively discussing internally the question of mergers with the other organisations, especially as each individual Association felt that the “European” idea became more and more an essential base for the future development of a real European Association. For example, by the mid 1990s half of the membership of the British Institute was based on the mainland of Europe. 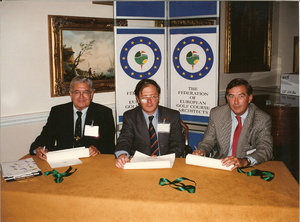 The following year, 1995, the agreement was widened to include the European Society of Golf Course Architects, and a second protocol signed with ESGA, presented by Ramon Espinosa at a splendid ceremony at The Wentworth Club during the Institute’s International Conference.

The formation of a Council and then a Federation of European Golf Course Architects paved the way for the merger with regular meetings between the representatives of the three organisations, initially in Brussels and at a final meeting in Paris, when all outstanding items were discussed. The talks were not only on how the merger could be possible, but also included lengthy discussions over the maintenance of standards of practice, upgrading and rationalisation of membership entry, and the standardisation of membership categories, thereby resolving any differences and anomalies between the organisations and ensuring that a general agreement was reached during this period of consultations. 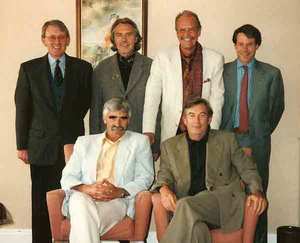 Not unsurprisingly, these discussions lasted many years, but by early 1999 British Institute President, Howard Swan, reported to the Annual General Meeting that a firm proposal for a merger was in place. Although there was a very small number of members who were uncertain about the benefits, the Institute’s Council was steadfast in its support for the principle of the merger and, at an EGM held in September of that year, the resolution to form one body, to be known as the European Institute of Golf Course Architects, was approved when the Presidents of the three organisations, Peter Harradine (ESGA), Alain Prat (AFAG) and Howard Swan (BIGCA), announced the future amalgamation of their associations. Final detailed discussions took place, including, at the final British Institute AGM on the 1st April 2000, to ensure that the transition from three separate and distinct organisations into one unified body could take place smoothly in July 2000.

The combined organisation will continue to concentrate on a high quality of education, both of its members and those wishing to enter the profession, to quote the words of Alain Prat … “becomes a gathering place for our shared experience, information, training and promotion for the common goal, and that our knowledge in the fields of design, construction, landscaping and the environment, becomes the basis to enhance the quality of European golf architecture”.