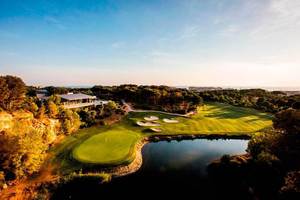 Lumine Resort is located 15 km south of Tarragona and 115 km south from Barcelona. The resort is well known due to its theme parks Portaventura and Ferrari Land, and its owned by one of the largest banks in Spain, with a large real estate area (2.800 homes) and several hotels.

In 2004 the developer company hired our team to prepare a routing plan and planning designs for a 45 hole golf course.

The Hills Course is set in the most picturesque area of the site, Cape Salou, being almost 360 degree surrounded by the Mediterranean Sea.
Construction works started by the endo of 2006 being the course opened in 2008.

Our design created a 72 par 6.378 meter course that includes some spectacular design features: three roman quarries that had been used for giving the 13th, 17th and 18th greens a unique background landscape; a nice pine tree wood where we have routed the holes, and some interesting elevation changes (clubhouse standing at the highest point of the main hill).

Being a commercial course it has become well known around Europe and has hosted many professional and amateur tournaments, hosting the finals of the Pga European Tour qualifying School.