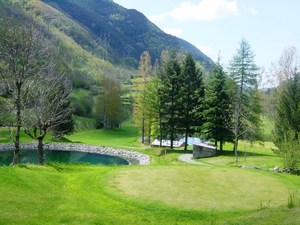 Golf Vallfosca was part of a large mixed use resort development, with ski, mountain trekking and golf as main features, 235 km Northwest of Barcelona, in the Spanish Pyrenees. The largest real estate developer in Spain in 2005 bought the land and started developing the area with ski fields, real estate, a hotel and a 9 hole mountain golf course.

The site occupied both sides of a nice deep valley, with a nice mountain river that crossed the property from North to South. We made a simple design with reduced number of hazards, as the trees, creeks, river and elevation changes created enough design elements to make the player think before hitting the ball.

The golf course was opened in 2007, but the ski fields were never finished despite a large investment was done.

The financial crisis of 2008 swept away the project, and in 2010 the golf course had to close the door. Many later attempts have been done to recover the facilities, but have not been successful until today.