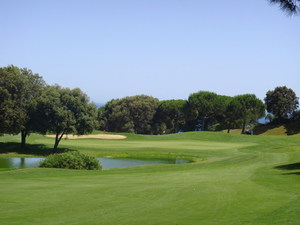 Club de Golf Llavaneras is one of the oldest golf courses in the Catalonia area, established in 1933, 35 km north of Barcelona by the Maresme coast. In a small terraced piece of land (32 hectares) was first a 9 hole course, par 33, a short course with severe elevation changes, small tiered greens and deep bunkers.

It was enlarged to an 18 hole 68 par, and later in 2000, new land became available being our team awarded the design of 2 new holes and the redesign of two more, turning it into a par 70.

Being a private course it is well renowned due to the character of the site, the magnificent sea views and the vistas from the Club house.