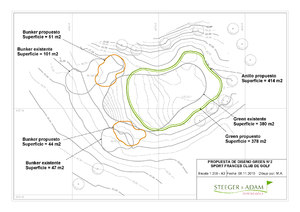 The Club de Golf Sport Francés was founded in 1957 under the initiative of Mr Alberto Etchegaray Peyreblanque and Mr Enrique Planella Roca. Both began on the Beltrán farm, that had been the Manquehue vineyard, the construction of a golf course, designed by the North American architect Mr Coonse and redesigned much later by the Chilean architect Eduardo Costabal Zegers.

The first internal tournament was won in 1958 by the Frenchman Mr Jean Muzard. From the outset Sport Francés caught the attention of the best golfers and for the public inauguration of this golf course in 1959 participated the very best Chilean golfers. The winner was the player from Viña del Mar and champion of Chile at the time, Mr Jaime Vergara Délano. The Chilean Golf Federation affiliated the club, giving the club an immediate prestige which placed it at the level of the best clubs in the country and the Club's Open's began to heavily influence local golf history.

In 1962 part of the land held by the landlords was allotted to finance the club-house and the first tennis courts. Thereafter began a phase of strong consolidation to complete the 18 holes of the golf course. In spite of the fact that the golf course had been repeatedly hit by the flooding of the Mapocho River, the fighting spirit of the members had always been able to overcome these misfortunes, to the point that today its fairways and greens are some of the best in the country. This was facilitated by the incorporation of a new irrigation system in 1984.

Many golfing members of Sport Francés have been champions of Chile such as Mr Mauricio Galeno, Mr Francisco Cortés and Mr Juan Eduardo Labbé. In tennis, the member Mr Marcelo Ríos has played at the highest world level and in grass hockey the club team has been crowned several times champion of Chile.

In 2015, the club commissioned us to make a total review of the course, which we presented to the club in a global masterplan document. The intent of the golf club is to progressively renovate and in some cases reconstruct the greens, to renovate the existing bunkers and place additional bunkers and to modify some tees. Additionally the intent is to finalise the computerization of the irrigation on the golf course. These works started in 2016 and are on-going and shall be carried through over several years.

Due to the nature of the renovation works on the golf course, the photos consist of before and after, and are best shown on the following link under "photos": www.adamgolfdesign.com/en/project/club-de-golf-sport-frances/