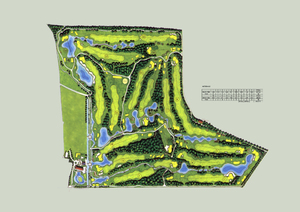 The Cely Golf Club situated near the famous impressionist village of Barbizon, 50 km south of Paris, was started in 1989 by a Japanese client, who wanted to create a spectacular venue both for his corporate needs and to host the world championship of women's golf. Owner of an exceptional collection of impressionist works, he also wanted to exhibit those works both on the course and within the buildings, so that his passion and love for the arts could be shared with others.

The concept was centered on the complete restoration and renovation of an existing 15th century chateau. The first two floors were to be designed for a luxurious club-house, with the remaining floors to house an impressionist museum and conference facilities. The parking area and less noble parts of the complex were built underground so as not to denature views to or from the chateau. Additional buildings housed a small scale boutique hotel, a large scale professional spa centre and a restaurant with haute cuisine under Fouque's management. The whole bordered by a canal and gardens.

The course itself was specifically built to host the world championship of women's golf in the best possible conditions and as such was built to the highest standard imaginable at the time. As a testament to the excellence of the course, the players commented "this is the most beautiful course that we have played this year on the LPGA Tour, the fairways resemble greens". This course is considered one of Europe's finest.