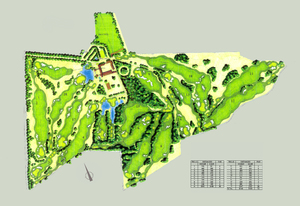 The Golf de la Forteresse situated near Fontainebleau, 65 km south of Paris, was started in 1987 by a farmer that wished to diversify and convert some of his land holdings into a member's/commercial golf course. He called upon the Fromanger & Adam Partnership as architects, Landscape Architects and Golf Course Architects to design this golf course.

The concept was centered on the development of a member's/commercial golf course by partially using the existing farm buildings and renovating them to their past glory as a fortified farm from the 13th century to include the club-house, restaurant bar, reception rooms and conference facilities. Outbuildings were to be renovated into bed and breakfast facilities.

The course itself was designed to make the best use of the existing features and topography and was articulated to integrate both the golf, and farming activities that had to co-habit and function in harmony with one another. The renovation of the farm buildings and the operation of the club-house also had to be envisaged in such a way as to protect and afford privacy to the owners. The golf course plays through a diverse range of landscape characters that include flat woodlands full of mature oaks and rolling former open farmland with dominant views over the surrounding landscape. Notable holes include the 6th with a mature oak, off-set on the fairway offering two different lines of play; the 9th which is a fun drivable short par 4 at your own risk, being particularly well defended; and the 16th which is a very tough par 3 with a long carry over water onto a small green.